The first week’s lecture gives an introduction to the course and some recaps of the C programming language.

What is this course about

No text books but has been drawn from: 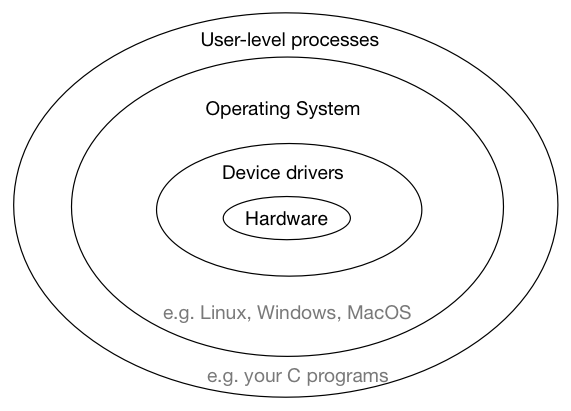 From source code to machine code

typedef is very handy. It is useful when we want some variables has a consistent type. For example, we can define Integer to int, and later if we found that int is not enough, we can just change the definition of Integer to long long int without modifying bunch of declarations of variables. It is also used in struct, where we would not need to write struct every time we declare a struct variable.
Some examples of typedef:

This is useful in combination with loops. Instead of writing

We can write it in a more concise way:

This reminds me of the recent PEP 572 – Assignment Expressions, which is added in Python 3.8, a new := operator, which works like the assignment expression in C. But it might be a little bit of redundant to add yet another expression. If I were to make the decision, I would just let the = operator in Python to return the R value instead of creating another operator.

The only significant difference among these data structures is that the order of retrieval of data.

In a 32-bit computer, the basic data types in C occupies following spaces:

But they depends on the compiler and will equal to the value of sizeof.

Performs logical AND on each corresponding pair of bits

This can improve the efficiency of the function to determine if a number is odd. Instead of writing (n % 2) == 1, we can write n & 1, to check the last bit of the number n.

Performs logical OR on each corresponding pair of bits

Performs logical negation of each bit

Performs logical XOR on each corresponding pair of bits

This is very useful in cryptography. Doing xor twice on the same number will get the original number back.

Shifts all bit to the left if unsigned, very fast

But if the number is signed, a algorithmic shift will be performed.

Shifts all bit to the left if unsigned. Algorithmic shift if signed and the signed bit replaces left-end bit.